New integrated center on the Port San Antonio technology campus will facilitate collaboration with region’s other experts and will serve as a model for communities nationwide.

SAN ANTONIO – With mounting cybersecurity attacks around the world targeting critical infrastructure – including energy grids, manufacturing operations, telecommunications, transportation networks and other essential sectors – the Alamo City is leveraging its substantial expertise to create one of the first integrated security operations centers in the nation. This further raises San Antonio's standing as "Cyber City, U.S.A." – home to the second-largest and fastest-growing concentration of cybersecurity professionals in the nation.

Last week, members of the San Antonio City Council approved $2.5 million in funding toward the effort. Combined with additional complementary partner funding from CPS Energy, the two organizations will build a new state-of-the-art integrated facility on the Port San Antonio technology campus beginning this year. The City and CPS Energy will be able to utilize the space at no cost – a value of approximately $3 million over the 15-year lease term.

By integrating some members of both the City and CPS Energy security teams into a single 20,000-square-foot secure facility, San Antonio will be significantly better positioned to coordinate against cyber threats as experts from both organizations work side-by-side to simultaneously monitor online activities and defend against potential attacks.

In the months ahead, the City of San Antonio and CPS Energy will finish out 20,000 square feet of specialized secure office space that will house the ARSOC in one of the Port's existing buildings at the intersection of 36th Street and Billy Mitchell Blvd. (photo courtesy Port San Antonio.)

The effort may also have the potential to benefit smaller municipalities throughout the region, who might be able to tap into the ARSOC's accelerated resource- and information-sharing capabilities. Many recent cyberattacks have been directed against smaller communities around the nation with limited resources to monitor and counter such threats.

The upcoming facility will be housed in an existing building completed in 2018 in the heart of the Port's campus near the intersection of 36th Street and Billy Mitchell Blvd. The location – only a 10-minute drive from downtown – provides the ARSOC with significant strategic advantages, including the proximity to other leading cybersecurity experts and future collaborators. The ARSOC will be operational by early 2021, as the City of San Antonio, CPS Energy and the Port work to finish the space to meet the program's specialized needs. 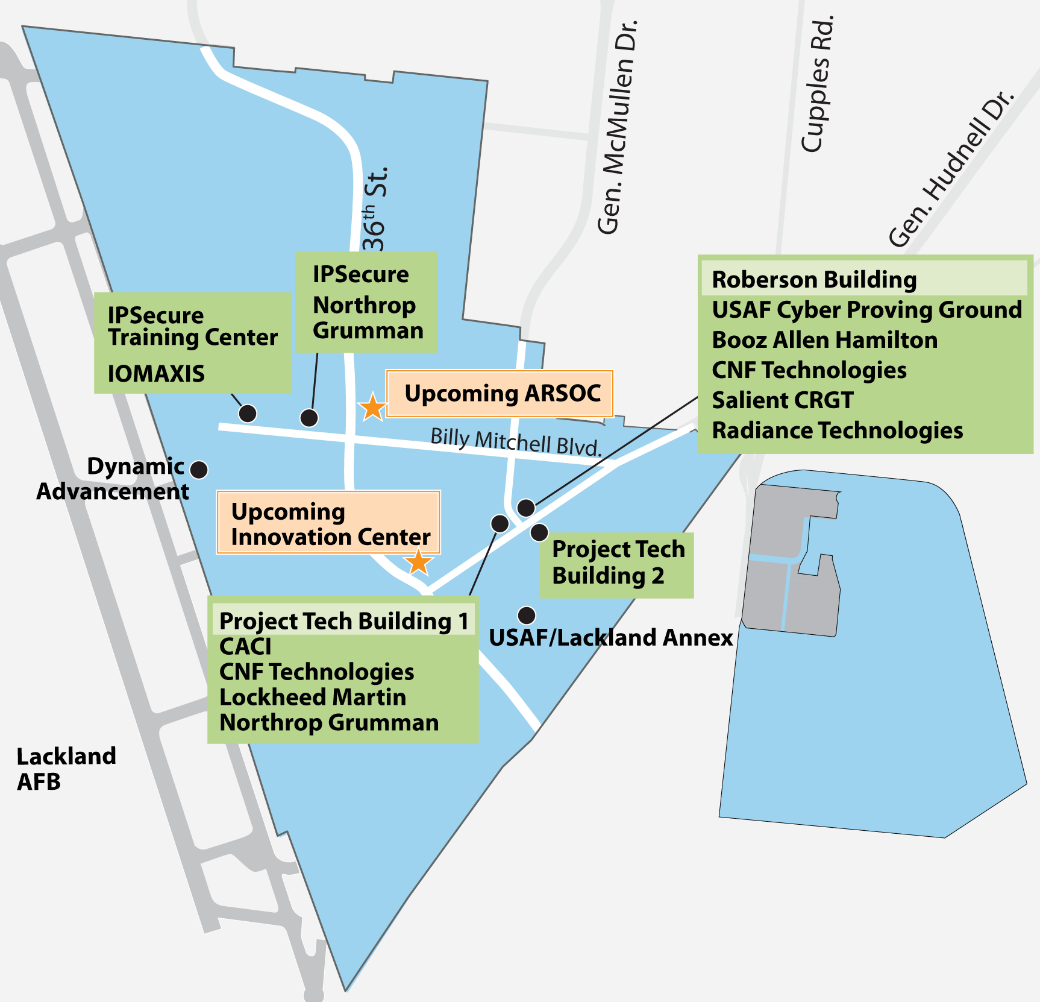 The ARSOC will be located close to major private-sector and Department of Defense cybersecurity operations that are rapidly growing on the Port campus – allowing for greater collaboration among the region's experts. (map courtesy Port San Antonio.)

Port San Antonio is already home to the 273rd Cyberspace Operations Squadron – part of the Texas Air National Guard which represents the U.S. Cyber Command's team tasked with supporting the 16th Air Force (Air Forces Cyber), also headquartered at the Port. The squadron also supports the State of Texas in responding to cyberattacks against local governments.

Furthermore, numerous private-sector firms at the Port are rapidly expanding as they provide the latest innovations in cyber defense to Department of Defense clients on the campus and throughout the region.

The ARSOC will also benefit from Port San Antonio's efforts to grow the campus' innovation ecosystem. The Port continues advancing the design of a planned innovation center spanning approximately 130,000 square feet. If construction is approved by the Port's Board of Directors later this year, the completed building will include a technology arena, a publicly accessible industry showroom and collaborative spaces where different industries can work together in the development of new applied technologies in cybersecurity and other disciplines.

The innovation center would provide ARSOC partners a place to conduct training and public demonstrations that will strengthen collaborations within the region, increase the public's understanding of critical infrastructure defense, and serve as a showcase for new approaches in cybersecurity that can be adopted by other communities around the nation.

The ARSOC will be located close to the Port's planned Innovation Center – providing City of San Antonio, CPS Energy and other cybersecurity experts as a dynamic space to train and demonstrate new technologies that are protecting the region's critical infrastructure. (photo courtesy Port San Antonio RVK Architects.)

"San Antonio's already strong momentum in cybersecurity will be enhanced by the ARSOC, " said Mayor Ron Nirenberg.  "The collaboration at the center of this project is a win-win for the City, CPS Energy, Port San Antonio, and our community. This is an important  step forward."

"Thanks to leveraged partnerships and meaningful investments from community partners, the addition of the ARSOC will transform the Port San Antonio campus and demonstrate our City’s commitment to building resiliency," commented Councilwoman Dr. Adriana Rocha Garcia, whose District 4 includes the main Port San Antonio campus. "Exposing younger generations to careers available at Port San Antonio can also have a lasting impact and residual effects for the broader community."

“With the recent uptick in attempted attacks on the cyberinfrastructure of government and commercial holdings, it is clear that developing regional strategies and resources to harden our cyber assets and deter attacks is essential. With the development of the Alamo Regional Security Operations Center, Cyber City, U.S.A., will be better positioned to keep our community safe,” said District 8 Councilman Manny Pelaez, Chair of the Innovation and Technology Committee.

"Protecting critical infrastructure and systems against cyber attacks is challenging and complicated, but it is critical to our operations and our community's vitality," said Paul Gold-Williams, President and CEO of CPS Energy. "Cyber attacks cause disruption, so it is paramount to continue making security, which is one of our six guiding pillars, a priority."

"Creating partnerships and collaborating with our partners across the community enhance our defense against these attacks by leveraging experiences and investments among our organizations," continued Gold-Williams. "Together, we can work to guard against the most sophisticated cyber attacks by creating a premier regional cyber ecosystem that both protects our assets and contributes to our community's economic growth, through new skills and expertise."

"In an increasingly connected world, it is essential that we safeguard the security of the interconnected systems that we all depend on," said Port San Antonio President and CEO Jim Perschbach. "The arrival of the ARSOC into our campus is another huge step in advancing our work to grow a technology innovation destination by increasing connectivity – both physical and virtual – so that our leading experts can work more closely than ever before in a joint effort to defend our community and our nation."

"We look forward to working side-by-side with the City of San Antonio and CPS Energy to launch the new facility and to continue growing the number of partners in our region and across the nation who will be able to tap into and learn from this innovative resource."