From delivering life-saving cargo across the world within one hour to tapping into boundless energy from orbit for the people of Earth, two pioneers keep elevating San Antonio’s profile as a global capital of space-based innovation.

Knight Aerospace and Astroport Space Technologies are poised to deliver game-changing innovations that will make our planet a more resilient and safer place.

San Antonio-based Knight Aerospace and Astroport Space Technologies are part of this year's Hyperspace Challenge cohort of two dozen companies and universities. Entities from across the U.S. and Canada participated in the highly competitive program.

Both Knight and Astroport are headquartered on Port San Antonio's 1,900-acre technology campus — home to a growing array of organizations focused on developing the latest technologies in space exploration and the related fields of aerospace, cybersecurity, robotics, energy, biomedicine and global logistics.

"Over the centuries, humankind has conquered the terrestrial, sea and air domains, and without question our next transformational era is in space," said Port San Antonio President and CEO Jim Perschbach. "We are very proud that two of the leading innovators within this increasingly connected campus are among the standout examples from across the nation to deliver the next generation of space-based technologies that will make the world a better and more resilient place." 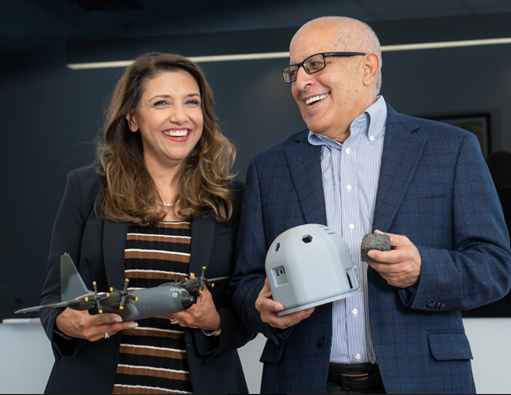 RISING TO THE CHALLENGE: Knight Aerospace President and CEO Bianca Rhodes holds a model of a C-130 — the type of aircraft that can currently transport her company's "flying emergency rooms". The same units could also be delivered worldwide via low Earth orbit rockets. Astroport President and CEO Sam Ximenes, who also operates on the Port campus, holds a scale model lunar habitat designed under his guidance by area students. On his left hand he holds an experimental brick made by melting basaltic rocks and which, through technologies his team is developing, could serve as the principal material for Moon- and space-based manufacturing.

As part of this year's cohort, Hyperspace Challenge organizers are presenting both companies to defense and other federal entities to share their capabilities and identify how these can address two of the key challenges established by the competition.

With the expectation that increasingly efficient reusable rockets will soon allow for the delivery of cargo worldwide by traveling suborbital or orbital flight paths above the Earth, there are important opportunities to use these new shipping lanes to respond to emergency situations and to provide humanitarian aid — particularly during natural disasters.

Instead of requiring hours — or even days — for cargo aircraft or naval vessels to reach an impacted area with equipment and supplies, rockets can arrive at those destinations with life-saving support within less than an hour. Their relatively small footprint and 90-degree vertical landing capabilities could also allow them to reach remote places that lack runways and locations otherwise inaccessible to aircraft. 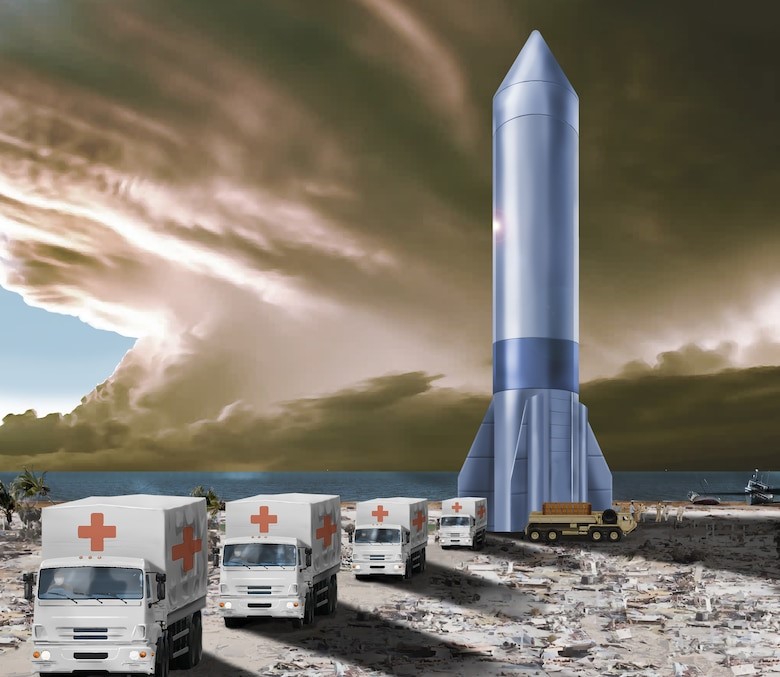 Knight Aerospace is a global pioneer and leader in transforming the mission of cargo aircraft. This includes the development of state-of-the-art Aeromedical Modules or "flying emergency rooms" that are currently being used to safely transport injured and seriously ill patients by air. The modular units — known as Aeromedical Bio Containment Modules (ABCMs) — are rapidly rolled onto the cargo hold of C-130, C-17, A400M and many other cargo aircraft. The ABCM allows for a full array of medical support while in flight, including emergency surgeries. Earlier this year, the Royal Canadian Air Force was the first to acquire this new technology. They have flown numerous missions saving dozens of lives during the COVID-19 pandemic. 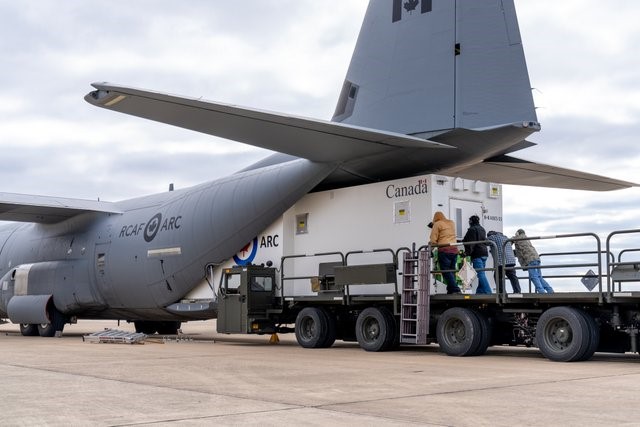 The first Knight Aerospace medical module as it is loaded onto a Royal Canadian Air Force aircraft at Kelly Field in early 2021 — ready to undertake life-saving missions in Canada and around the world. 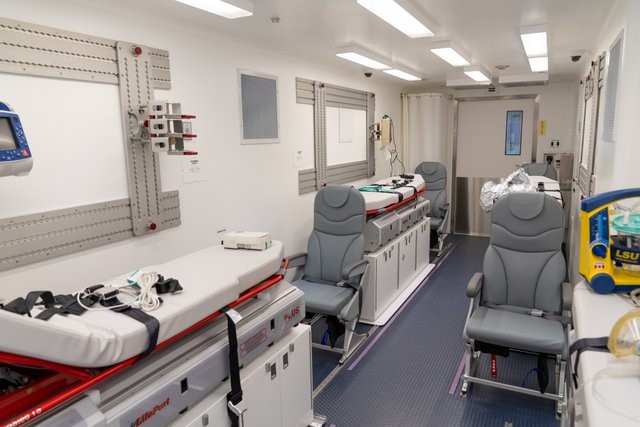 Interior of the medical module can provide a full spectrum of hospital grade care while in-flight or as a standalone emergency medical facility on the ground. 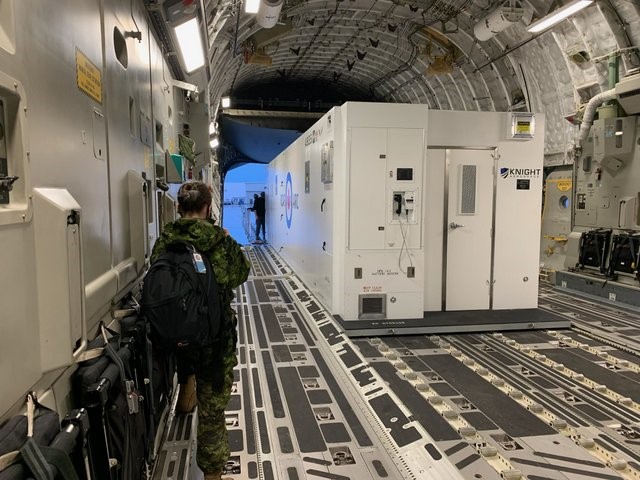 The ABCM operates within different types of cargo aircraft. Shown is one of the unit's first missions aboard a Royal Canadian Air Force C-17. Now, as part of the Hyperspace Challenge, Knight is exploring the possibility of transporting similar units aboard low Earth orbit cargo rockets for delivery and activation anywhere in the world within an hour or less.

The Aeromedical Modules can also function as standalone medical facilities on the ground. All that is required is a single power source, such as a generator, for them to deliver hospital-grade care.

As part of its engineering and development program, all Knight Aerospace products undergo rigorous testing to ensure airworthiness, including the ability to withstand significant G-forces. Given its capabilities, adaptable configurations and advanced design, Knight foresees the unmanned transportation of similar modules via reusable space-faring vessels.

Furthermore, to address this challenge, Knight Aerospace will team with Port San Antonio-based Exploration Architecture Corp., or XArc. This collaboration leverages XArc's current Cooperative Research and Development Agreement (CRADA) with the U.S. Transportation Command (USTRANSCOM) and SpaceX to investigate how to move cargo anywhere in the world in an hour or less via global point-to-point rocket transportation. Knight and XArc will thus collaborate in the development options for medical cargo delivery.

"We are thrilled to have been selected as part of this year's Hyperspace cohort," said Knight Aerospace President and CEO Bianca Rhodes. "Our technology is proven and already saving lives as it is integrated into aerial transport. We are now greatly looking forward to growing our partnerships here at Port San Antonio and nationally, including collaborating with future users among federal agencies, to use space transport to deliver these capabilities in record time. We have learned that minutes count when responding to natural disasters and other challenges."

Headquartered within less than a mile from Knight Aerospace, Astroport Space Technologies has been called upon by the Hyperspace Challenge to lend its expertise to advance the federal government's On-Orbit Servicing, Assembly and Manufacturing priority.

Astroport was selected for the challenge based on its technology to melt lunar minerals as a principal source of raw materials. This entails using basaltic rocks and other minerals on the Moon as the primary resource to build everything from lunar infrastructure to components for large orbiting structures.

The company is currently at work with numerous partners, including the University of Texas at San Antonio (UTSA), in establishing processes whereby robots, three-dimensional printers and other unmanned technologies can be initially deployed on the lunar surface. Once there, they will extract lunar materials and use an array of processes to build habitats for humans, as well as launch pads and other infrastructure required for establishing long-term lunar colonies. 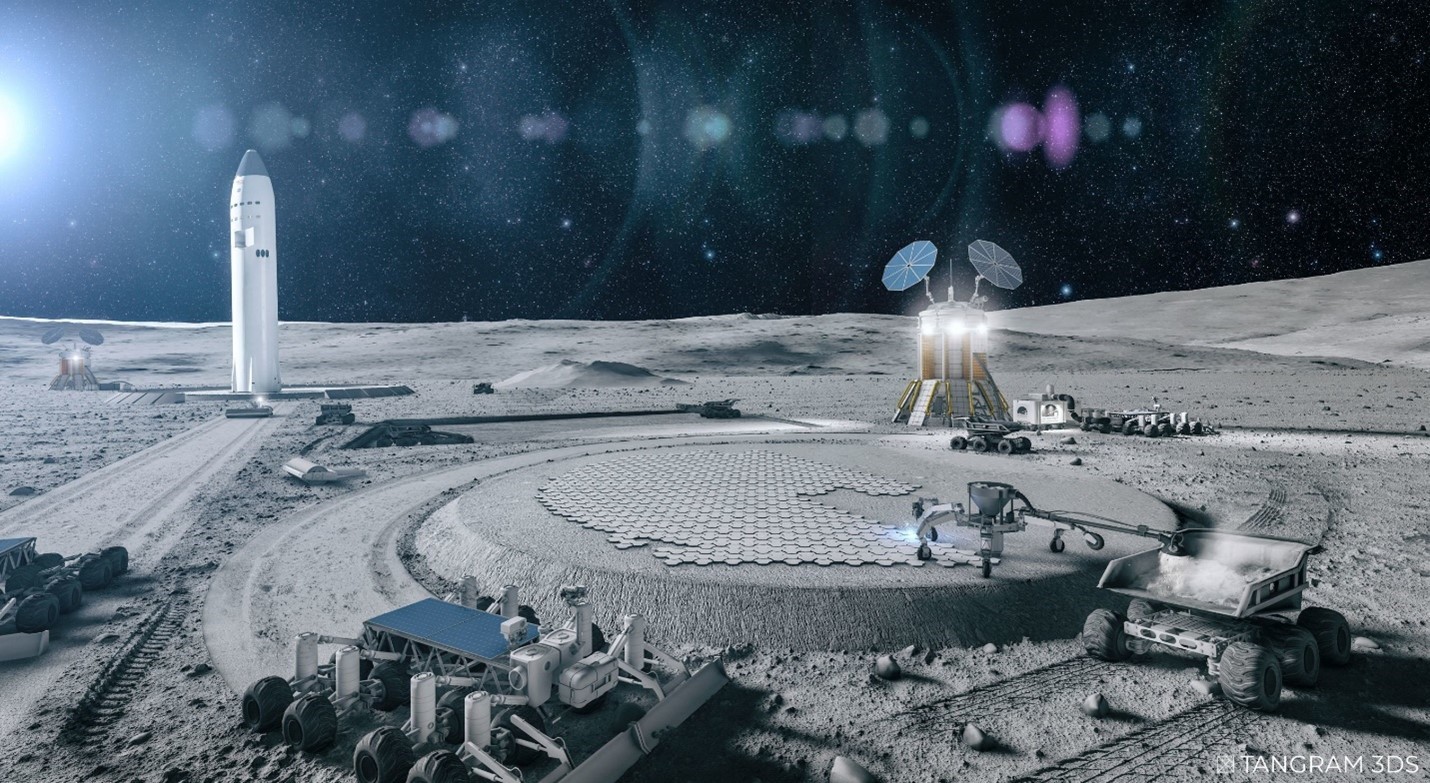 Rendering of what the early phases of a colony on the Moon might look like. In the foreground, robots are building a launch pad with bricks created by grinding, melting and re-shaping basaltic rocks. Materials extracted from the lunar surface can be used to build infrastructure on the Moon or in space. (Courtesy XArc) 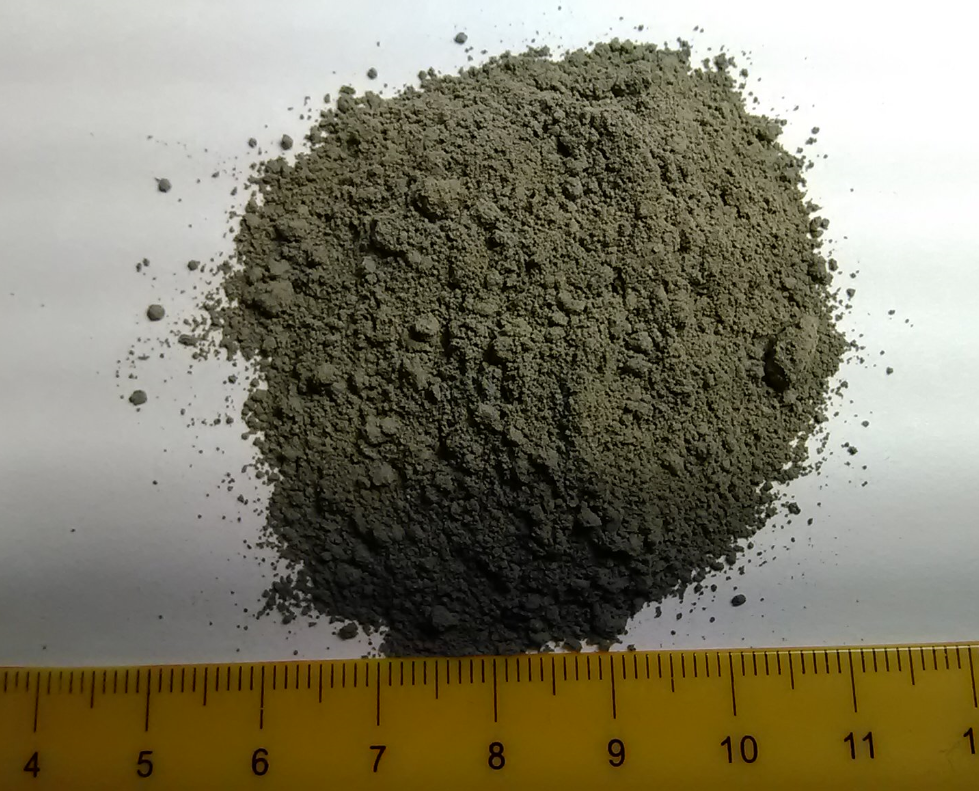 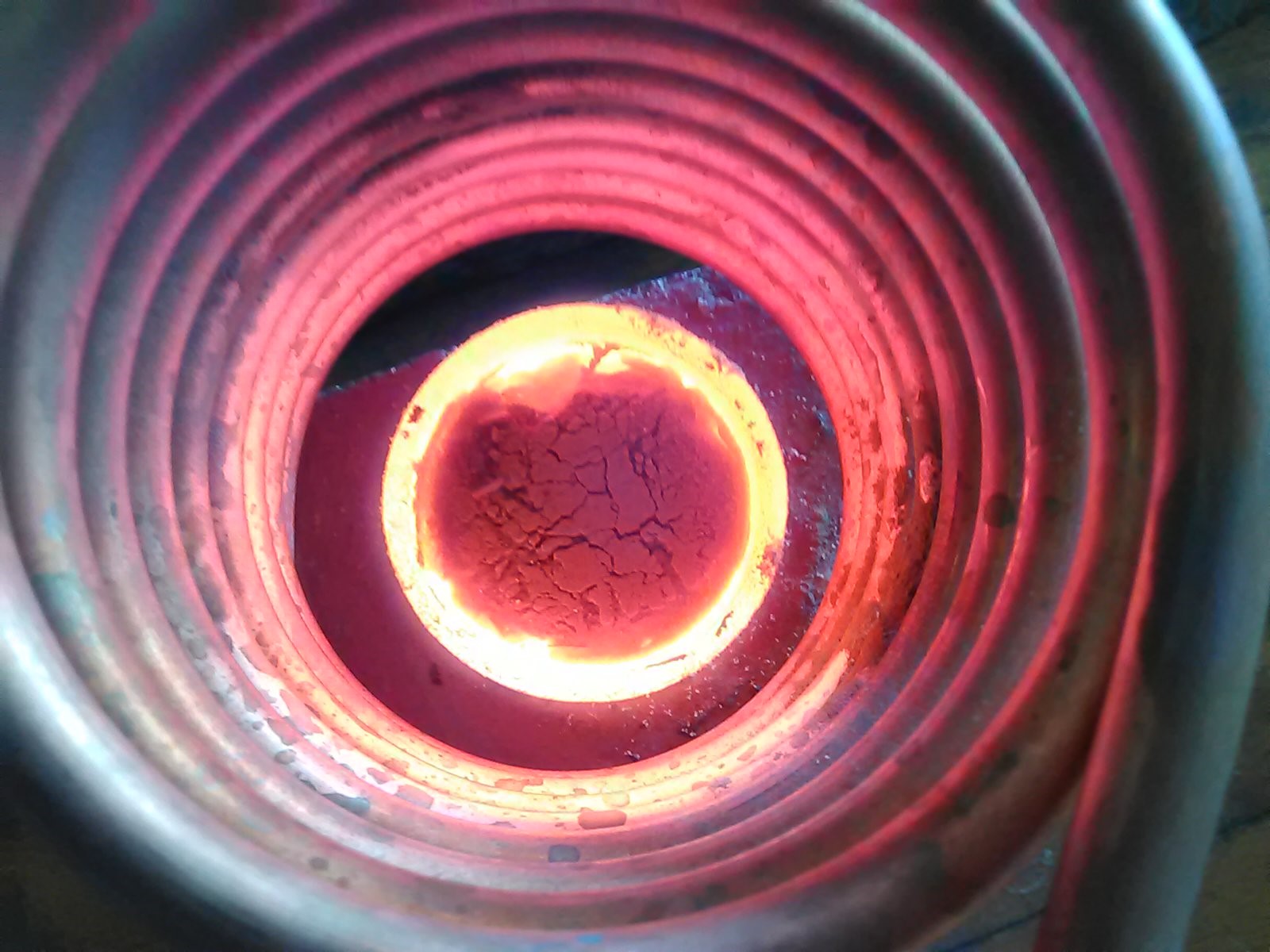 Building blocks for extra-terrestrial construction: Powdered basaltic matter found on Earth with properties that are very similar to Moon rocks is subjected to high temperatures in Astroport's experimental induction oven. The molten material is then shaped into building components for everything from landing pads and habitats on the Moon and Mars to the framework of massive satellites that will be manufactured in Earth's orbit. (Courtesy Astroport) 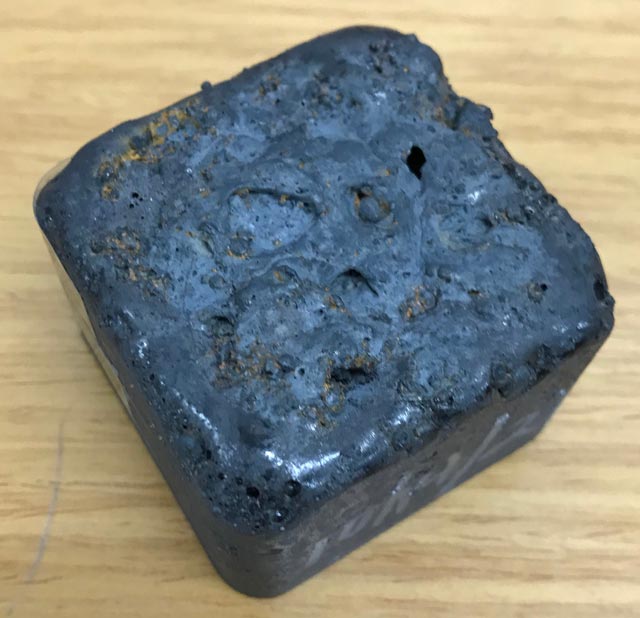 Molten feldspar brick created by an induction furnace in Astroport’s laboratory. Similar minerals obtained from the lunar surface can be launched into orbit and melted and shaped by space-based “factories” that will use the raw materials to build the framework for large satellites, space stations and other infrastructure. 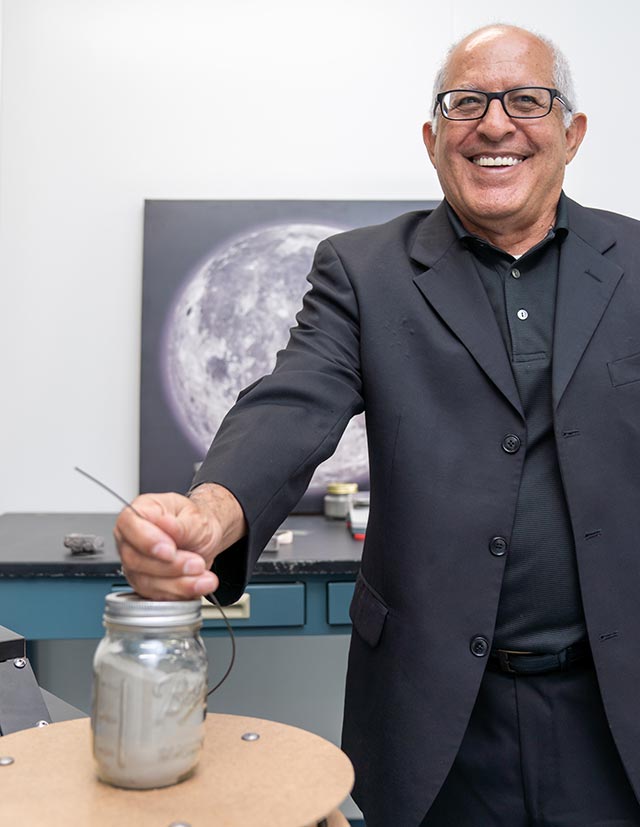 GOOD DIRT: Ximenes in the Astroport lab holding basalt filament for 3D printing that was produced from powdered basalt feldspar shown in the Mason jar. Feldspar is a mineral whose properties are similar to raw building materials found in abundance on the Moon's surface.

As part of this process, Astroport is leading a NASA-funded effort to determine how to use minerals readily available on the surface of the Moon so they can be heated to a molted state to serve multiple uses, including being shaped as inter-fitting bricks that robots can use to build landing pads before human arrival.

The same materials can also be launched from the Moon into Earth's orbit where they will supply space-based factories equipped with furnaces and three-dimensional printers that shape these feedstock minerals into beams, connectors, joists and other components of large frameworks for massive infrastructure, such as radio telescopes or space-based power generation stations.

Thanks to new advancements by NASA and other researchers in recent years, the long-anticipated ability to capture limitless solar energy from orbit and transmit it on an industrial scale wirelessly to Earth is increasingly within reach. 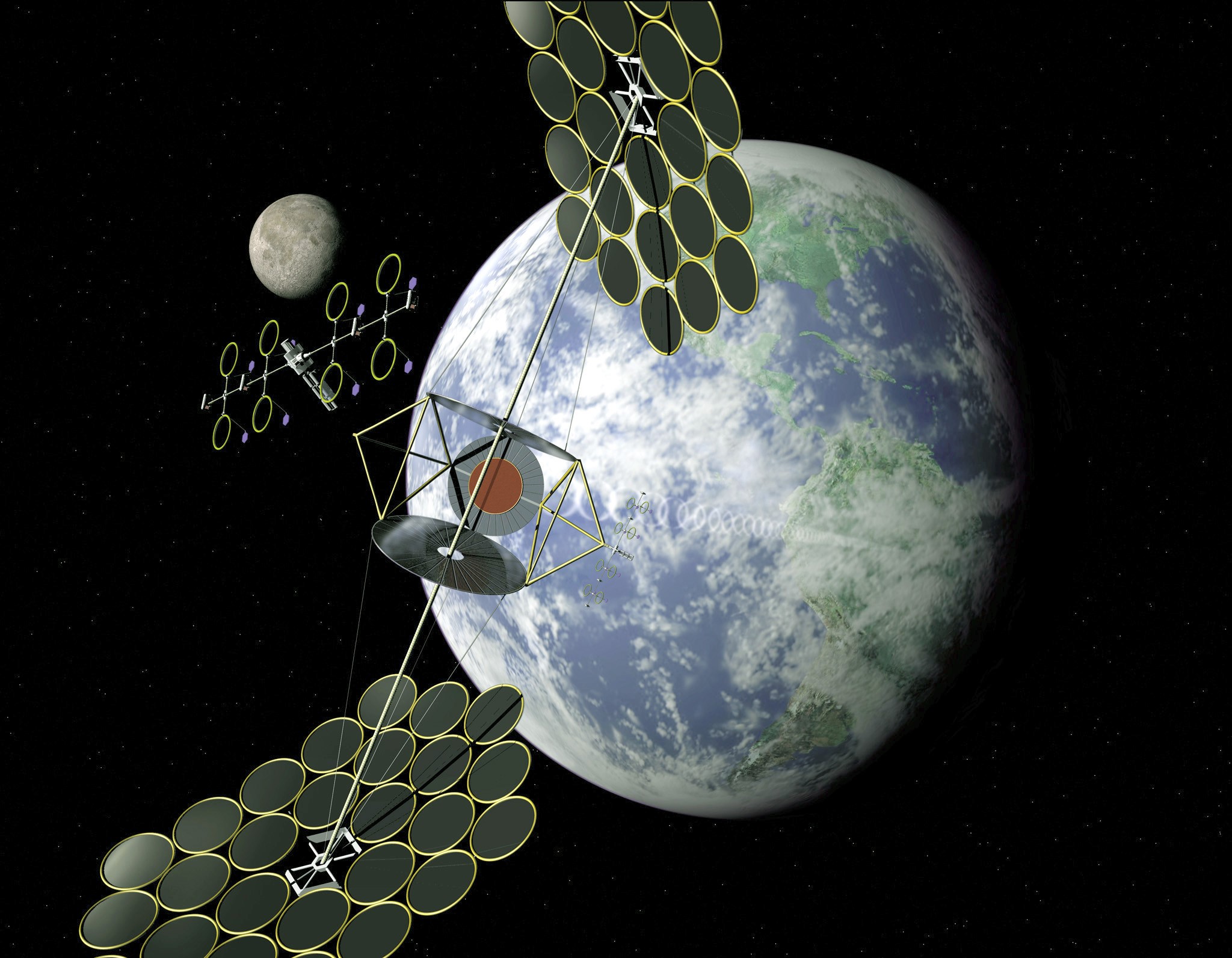 Space-based furnaces being developed by Astroport can serve as orbiting "factories" that receive minerals mined from the lunar surface to be shaped into beams and other components for massive orbiting structures, such as radio telescopes or, as shown, miles-long arrays that capture solar energy and transmit it wirelessly back to Earth. (Courtesy NASA)

Space-based power generation envisions deploying massive arrays of solar panels in orbit to harness and then transmit the Sun's energy in the form of microwaves back to receiving stations on Earth. The stations would in turn supply grids that power communities across the planet. Among its many advantages, this form of energy would significantly reduce dependence on fossil fuels and would allow for the delivery of electrical power anywhere on Earth without the need for costly infrastructure.

"Lunar colonies and space-based electrical power generation are no longer far-away notions of some distant future," he added. "Across the planet, nations are competing to be the first to harness this incredible potential, and we foresee that very soon those of us on this quest will be pivoting from the laboratory into implementation."

In addition to the valuable engagement opportunities already underway between the Hyperspace Challenge's cohort and federal entities, on December 2, Knight, Astroport and the other 22 selected firms and universities will be part of the Hyperspace Summit — a pitch competition where the organizations could receive up to $100,000 in cash prizes to expedite their activities.

"By being among the finalists in this year's Hyperspace Challenge, it is giving our San Antonio-based technologies added visibility to the decision-makers at the federal level who can accelerate that transition," Ximenes further noted. "It's a very exciting time to be part of humankind's future in space — a future that will require the participation of many people, and we're honored to be among them."