This July an icon of global aviation celebrated its one-century anniversary.

Boeing, which operates a big facility at Port San Antonio, traces its history to the dawn of aviation.

The small enterprise founded by William Boeing in 1916 as Pacific Aero Products—manufacturing aircraft in a former Seattle shipyard—stands today as the world’s leading aerospace firm.

More than 160,000 women and men worldwide work in the company’s divisions—supporting thousands of commercial and military aircraft that at this very moment are flying the world’s skies.

And Boeing’s reach isn’t limited to our planet. For over 50 years the company has been an integral partner to space exploration, supporting efforts that include the early Mercury program and today’s International Space Station, with myriad milestones in-between.

With a record 5,500 new Boeing commercial airplanes currently on order, the years ahead point to a strong future for one of our nation’s leading industries. In fact, Boeing forecasts that over the next 20 years, there will be a global need for over 39,600 airplanes.

Launched in the late 1990’s, Boeing’s facility at the Port plays an important role in the company’s success today and ambitions for the future.

The company’s expansive aerospace campus at Kelly Field, the Port’s industrial airport, is anchored by the world’s largest freestanding high-bay hangar in the world—nearly a million square feet and able to accommodate 16 large aircraft simultaneously. 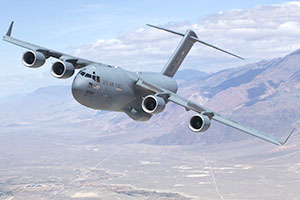 A mainstay of Boeing’s work at the facility is comprehensive support for the C-17 Globemaster III—one of the most reliable and enduring platforms in defense logistics.

Over the years, Boeing’s San Antonio team has upgraded and delivered nearly 1,000 aircraft to customers around the world—many of them C-17’s. The planes undergo a complete overhaul including structural, avionics and self-defense systems work that will keep the current fleet of nearly 300 aircraft flying for years to come.

In recent years, Boeing San Antonio has also been called upon to support commercial aviation. In 2011 the site oversaw change incorporation for several brand new 787 Dreamliner and 747-8 cargo freighters. Work at the San Antonio site entails conducting substantial electronics upgrades and other refurbishment before the airplanes are delivered to the company’s customers, which have included Japan Airlines and Air India.

And in 2012 Boeing San Antonio was entrusted with support of the Department of Defense’s executive fleet—which include some of the most advanced aircraft in the world.

In the course of nearly 20 years, Boeing San Antonio has time and again earned the distinction of having one of the most flexible and reliable workforces in the industry—able to adapt as they continue to maintain an array of aircraft that include the workhorses of defense operations along with today’s modern airliners.

As both Boeing and the Port hit the century mark (established in 1917, Kelly Field will mark its 100th anniversary next year), both organizations look ahead to an enduring collaboration to grow San Antonio’s standing as a center of aerospace excellence.