The Port continues to work hand-in-hand with the City of San Antonio and the Texas Department of Transportation (TxDOT) to make big improvements to Quintana Road immediately outside the Port’s East Kelly Railport.

The $10-million effort will improve traffic flow and safety on the heavily used thoroughfare. Quintana is an important connection between the city’s south and west sides and is experiencing increased traffic as the Port’s East Kelly Railport and neighboring St. Philip’s College Southwest Campus continue to grow with the surrounding community. 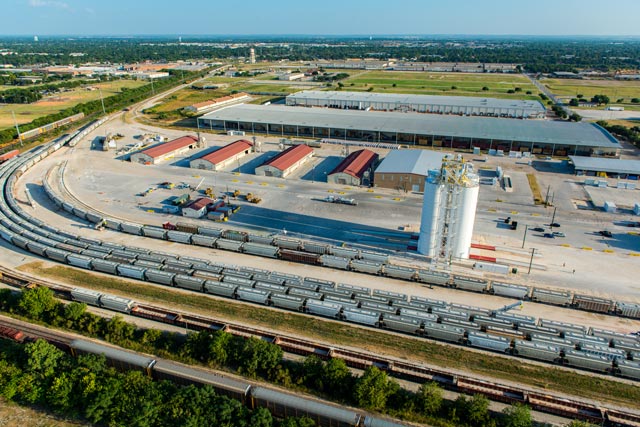 The road project improves traffic flow and safety. It also supports growth at East Kelly Railport, where hundreds of new jobs have been created in logistics and manufacturing in recent years.

The project is currently being designed by engineers. It is funded by the San Antonio-Bexar County Metropolitan Planning Organization (MPO), the State of Texas, and the Port. It will provide much-needed enhancements to a 1,500-foot stretch of Quintana between Harmon and McKenna avenues.

The realignment and widening of Quintana Road will ease congestion and provide greater safety for drivers over several blocks. Turn lanes will be added at Quintana’s intersection with Dunton—the northern access point into East Kelly Railport, which in recent years has seen increased activity from trucks carrying cargoes that support the region’s construction, manufacturing, retail and energy industries.

An important component of the project will significantly increase drainage capacity: Stormwater inlets will be added at the intersection of Quintana Road and Dunton Avenue. In the past, heavy rains blocked access at the intersection—halting drivers and requiring residents of the Quintana neighborhood to drive several miles out of their way to travel between the north and south.

The effort will widen the road and add important drainage infrastructure to alleviate flooding at the intersection with Dunton Avenue and in residential streets near a new drainage channel and detention pond.

Under the redesign of the intersection, captured rainwater will flow south through a new drainage channel that will be built primarily on Port property along the western edge of East Kelly Railport. That water will discharge into a new large detention pond on the south end of the Railport. This new infrastructure will also allow water to flow from residential streets along the drainage channel as well as storm water from St. Philip''s College. The detention pond, located immediately to the north of Fay Avenue on Port property, will similarly reduce flooding for residences immediately south of the Railport.

“This project is vital to both the immediate community and job-creating industries across our region,” said Ray Flores, the Port’s Vice President of Real Estate Development. “The collaborative effort makes this a much safer stretch of road — also supporting the new activity we’re seeing at the Port, which is also creating jobs for our community in logistics, manufacturing and other enterprises.”

As it finalizes planning of the project in 2017 and prepares to break ground next year, the City of San Antonio is reaching out to area residents to discuss the project, timetables, and to receive comments from the community.

A public hearing on the project is scheduled for Tuesday, March 28--see details below. The event will serve to discuss the project, timetables and to receive comments from the community. Assistance will also be provided for Spanish-speaking residents. (See sidebar for official hearing notices, which include information related to Section 4(f) of the DOT Act and Texas Parks and Wildlife Code Title 3 Chapter 26; project schematics; and the Draft Environmental Assessment.)