SAN ANTONIO, TEXAS – Port San Antonio has had a record year as it connects thousands of people throughout the region with life-changing opportunities in advanced technologies, education and entrepreneurship.

Port President and CEO Jim Perschbach provided a strategic outlook at a gathering of community, education and business leaders during the State of the Port briefing, on November 8, organized by the West San Antonio Chamber of Commerce.

“This has been a time of big change for our Port as a place that is transforming lives today. Perhaps of greater importance is how we’re creating a sustainable foundation that will transform the lives of future generations across our community,” said Port San Antonio Board Chair Chris Alderete during her opening remarks. 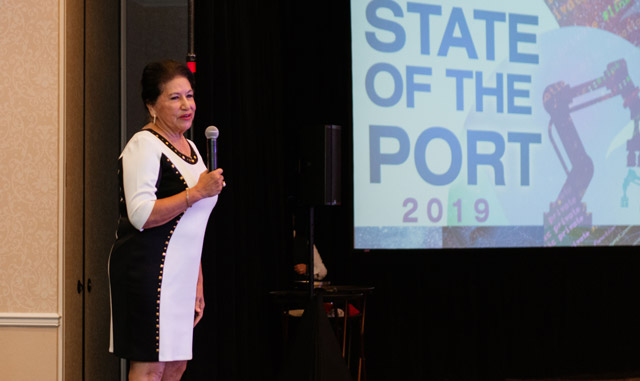 Board Chair Chris Alderete delivering welcome remarks during the State of the Port update.

“We, our customers and thousands of people on our property have had an incredible year. This success is not because of luck, nor is it the result of a single transaction. It is the outcome of a strategic vision that focuses on empowering people in our community with a state-of-the-art education and then gives them the spaces, tools and connections to innovate and to compete globally.”

New Jobs at the Port

Thanks to this strategic blueprint, in Fiscal Year 2019, which concluded on Sept. 30, industries based at the Port created over 1,200 jobs—a record for the organization. This number builds on the previous year’s momentum, when over 1,100 jobs were created in the target industries of aerospace, cybersecurity, applied technology and defense. And with FY2020 only a few weeks underway, Port customers are already preparing to bring over 400 additional jobs to the campus, with more announcements expected.

In his briefing, Perschbach said the organization is accelerating plans to add to its current customer base of more than 80 employers while strengthening a unique ecosystem that grows connections and collaboration among tech innovators on the 1,900-acre Port campus and beyond.

“There is a multi-trillion-dollar market of opportunities at home and across the world,” said Perschbach. “As we continue to build the Port and grow strategic connections with industries and educators, we are creating a pathway for thousands of San Antonians to be part of those opportunities.”
Among many examples highlighted by Perschbach are Plus One Robotics and Reckon Point—two startup companies headquartered at the Port whose technologies are revolutionizing industries around the world. As a result, the two entities are growing their operations and hiring an array of professionals, including engineers, designers, artificial intelligence (AI) specialists and other innovators.

Plus One Robotics, which earlier this year expanded into a new 10,000-square-foot office/lab space at the Port, specializes in retrofitting industrial robots with artificial intelligence and visual sensors. This allows the robots to adapt in dynamic environments, such as e-commerce fulfillment warehouses or factories. The company’s technology allows the robots to “see” and “learn” as they increase efficiency and safety in the environments where they are deployed. In turn, people in those industrial settings are able to fill higher-value jobs, such as programming, monitoring and securing networks of robots. Plus One Robotics engineers at Port San Antonio.

Similarly, Reckon Point integrates robotics with LIDAR-based sensors. The company’s technology quickly creates precise maps and three-dimensional renderings of large interior spaces, such as hospitals, factories and airports. This data allows operators of those facilities to maximize their use and develop related applications, including an ability to track the movement of inventory and equipment.

Like a growing number of technology firms based at the Port, Plus One Robotics and Reckon Point are forming ever-closer partnerships with area educators—from elementary schools to graduate university programs—to inspire and develop the next generation of talent and technological breakthroughs.

In aerospace, Port customers StandardAero and Boeing—each based on the campus for over 20 years—have announced major new military and commercial projects and significant growth to their employment bases.

Boeing has announced that it is doubling its local workforce. The firm’s most recent projects at the Port include the modernization of the F/A-18 Superhornet fleet for the U.S. Navy. Boeing’s team at the Port is modernizing the U.S. Navy’s F/A-18 fighter fleet.

Similarly, StandardAero, which specializes in the maintenance and modernization of an array of aircraft engines, recently announced a new F-110 engine project at its San Antonio site. With other military and commercial engine projects recently announced, the company is also on a path to substantially grow its team of technicians, engineers, programmers and other aerospace industry specialists. Also in 2019, San Antonio-based Knight Aerospace announced it is relocating to the Port and adding new employees. At its Port location, Knight is expanding its capacity for designing and building state-of-the-art pods and other palletized systems. This technology allows military and commercial operators to transform cargo aircraft into multiple uses, including as modern flying medical centers. The highly specialized units developed by the company’s San Antonio team are then sold to clients in over 25 countries.

The Port is also home to major cybersecurity operations, including 1,000 personnel employed by the 16th Air Force (Air Forces Cyber) headquarters. As a result of this critical mass, numerous private-sector cybersecurity innovators have established operations at the Port in recent months to support both military and commercial clients.

This activity has been in full swing in recent months. Since the spring of 2018, cyber industry leaders that include Lockheed Martin, CACI, IPSecure, CNF Technologies, Northrop Grumman, IOMAXIS, Booz Allen Hamilton, Salient CRGT and Dynamic Advancement have either launched new operations at the Port or have expanded in state-of-the-art facilities campus-wide.

Three of these companies—Lockheed Martin, CACI and CNF Technologies—have announced that they are locating new operations at the recently-completed Project Tech Building 1. Launched in the spring of 2018, the 90,000-square-foot office facility provides specialized features for cybersecurity and other advanced technology industries, such as capabilities to finish-out spaces designated as Sensitive Compartmented Information Facilities (SCIFs). As the building approached full capacity in 2019, the Port’s Board of Directors gave the go-ahead in September to build a second facility to accommodate growing demand from the cyber and defense communities. The upcoming facility—Project Tech Building 2—will be completed in early 2021 and sit across the street from the first building. It will span 174,000 square feet across five stories.

During the State of the Port event, Perschbach informed the audience that the organization has already secured its first lease for Project Tech Building 2. The new tenant will occupy half of the space and bring an estimated 400 additional jobs to the Port. Further details will be available in the weeks ahead, he stated.

Given the significant momentum experienced in 2018 and 2019, Perschbach concluded his presentation by highlighting the Port’s ambitious plans to  launch a comprehensive innovation center in the heart of the campus in the weeks ahead.

The large space, which will include a technology arena, museum, collaborative technology transfer lab and an industry showroom, will accelerate the evolution of innovations that are already being developed at the Port and throughout San Antonio. The innovation center will include a vast technology arena to host conferences, gaming competitions, training and demonstrations.

The innovation center will also significantly expand the size and reach of educational initiatives by the San Antonio Museum of Science and Technology (SAMSAT) and partners that include the WEX Foundation and SASTEMIC (the latter of which merged with the museum in 2019).

These leading educational organizations are already leveraging the Port’s platform and unique features to deliver an array of innovative STEM- and STEAM-based programs to thousands of students throughout San Antonio, in partnership with area schools. 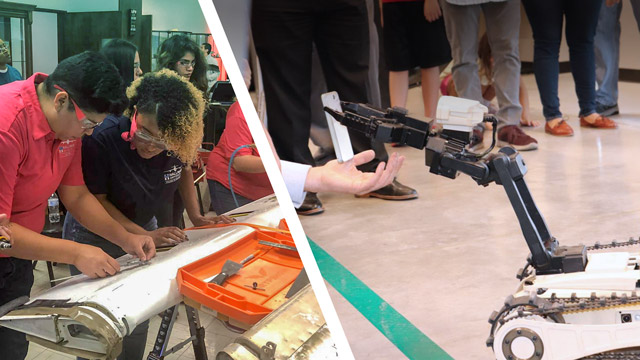 From robotics to cybersecurity to space exploration, thousands of kids have already participated in programs hosted by SAMSAT and education partners.

Perschbach noted that since SAMSAT first established operations at the Port in 2017, over 10,000 students have already participated in programs developed by the museum and its partners.

“The upcoming innovation center will significantly grow our partnerships with school districts and other educators throughout San Antonio,” he added, noting that the new facility will be able to accommodate additional STEM programs serving over 100,000 students a year.

The Port is also strengthening its partnerships with area schools, including the Edgewood and South San independent school districts that straddle the campus. In 2019 the organization launched its first internship program, where eleventh-graders from both districts worked alongside Port team members.

Over the course of the six-week summer program students developed skills in support of business development, property management, finance, information technology and marketing. In that process, they grew their awareness about opportunities among the Port’s technology customers and the educational paths available to them to access those careers. Educational efforts at the Port will see a further boost in 2020 when Compass Rose launches its new K-12 campus next fall. The school will be open to students throughout Bexar County and expects to enroll over 1,000 pupils at full capacity, focusing on STEM-based curricula that is aligned with the technology careers growing on the campus.

“Together—thanks to the work of our customers, educators and an array of other partners—we will continue to grow a unique place that inspires and connects our community’s young women and men with futures in industries that are thriving. This will allow a new generation of innovators to call San Antonio home as their talent and hard work have a positive impact around the world.”